I have two-ish sensible routes on bike to/from work, depending on mood/weather/roadworks. Except for the last mile.

Next time I’m in the office I’ll grab the GPS log, process it outside of here, and show how the last mile 1 takes far too long. 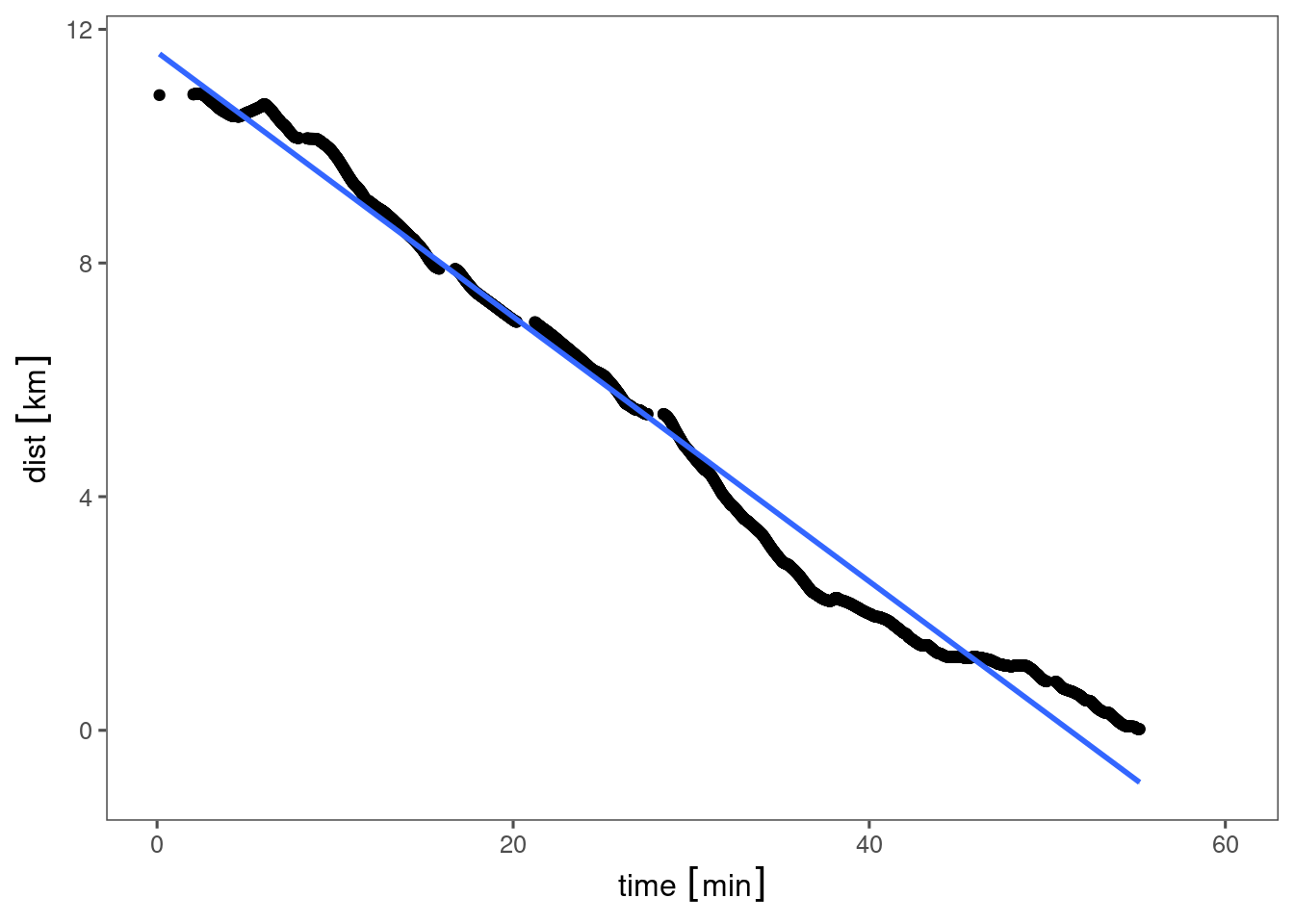 dist is distance as the crow flies from the target location. Different paths to work are different lengths, but I want to compare door-to-door time.

The gradient of that line corresponds to a sort of average useful speed - time spent going away from target is penalised, only movement towards the target counts. I kind-of want to throw some components together - compare crow-flying distance to work against my average bus of about 70 mins each way. But I suspect with a very large variance…

This means I can actually blog about this, since I’ve already given away enough info for anyone to work out which office I’m at, but haven’t said where home is.

Between Cycle Superhighway 12 and National Route 66 I can get to Point A and I want to be at Work:

The title for today’s post derives from the crow-flying distance between those points:

It’s a matrix of pairwise distances, but 1489m is close enough to 1 mile to make comparisons to “last mile” in shipping.

I tinkered with the valhallr library last year and still have a local Docker image of West Yorkshire set up for routing. Docker is great - I can tell the image to go to sleep when I’m not playing with it.

After the initial setup, which was basically feeding a bbox of limit coordinates into a config file, waiting about 1 afternoon for it to work out the network, this is by far the easiest roll-your-own routing engine I’ve played with.

Note - 1 way systems mean that point A -> work is a different problem to work -> point A.

Ah. Point A is in a slightly awkward spot for the return trip, and valhalla doesn’t believe in dismounting and crossing the road as a pedestrian.

That looks much more sensible. However, I suspect that the OSM data that I fed into my valhalla server is way out of date, and the odd road might be shut for roadworks now.

Compare with cyclestreets there’s pretty good agreement. In the return trip it does believe in dismounting to cross awkward roads. I also really like the cycle-focused OSM tiles CS use - cycle paths, pubs and cafes are highlighted.

Both are better than what I tried the first time, which mostly involved getting stuck in the inner Leeds loop, roads/cycleways closed for roadworks, and random disappearing cycle paths.

I’ve played with the Google Maps routing service, but the programmers at Google seem to believe that any road that is bike-legal is fair game.

ORS has some interesting features. For the full route I could mark out a polygon of “avoid this area” around the death road if it tried to take me that way. I might try building their thing another time, or playing with their free API tokens. I doubt I’d go past the free tier.